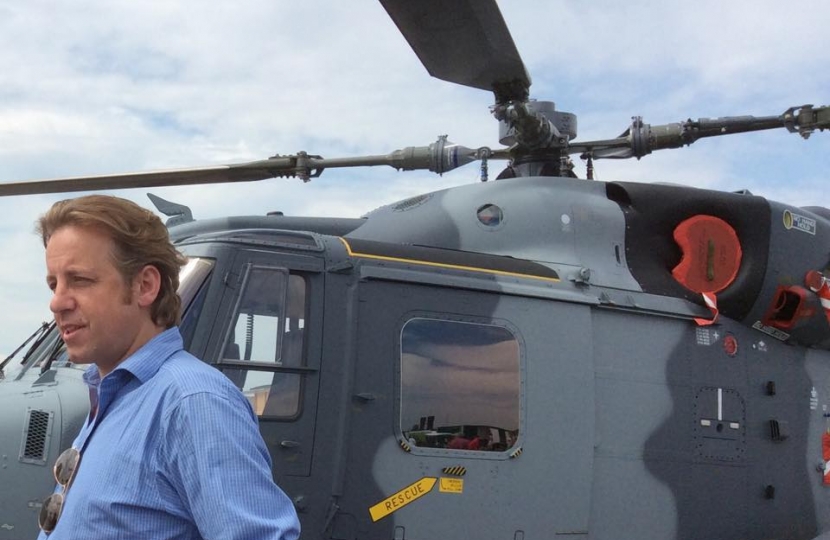 Mr Fysh wants the Secretary of State to redouble efforts to help British exports of helicopters, especially those made by Leonardo in Yeovil, to support the long-term future of helicopter manufacturing in the UK.

Mr Fysh discussed the export prospects for Leonardo’s advanced AgustaWestland Merlin and Wildcat military helicopters, as well as its AW139 civil helicopters, and the way the Department for International Trade’s new network of trade offices can help the leading aerospace company in its sales efforts.

He also discussed major strategic partnering opportunities in new markets which Leonardo has indicated the government could support as part of its high-level, trade-opening agenda, as well as enhanced co-operation between trade and defence functions of government in looking to develop opportunities.

Mr Fysh said: “UK helicopters are among the best in the world and are capable of great export value.

“Now that the UK military’s orders of new helicopter equipment from Leonardo are coming to an end, for the time being it is important to make the most of these great products in export markets.

“Strategic overseas partnerships in design and development also make sense given the high level of expertise that exists in the UK helicopter industry and our wish to preserve it.”

The Secretary of State added: “Leonardo Helicopters, formerly Westland, is at the centre of the UK helicopter industry and my department will do all it can to help it market its high-quality, battle-tested products abroad.

“With a newly market-focused network of trade offices, we are well placed to support all UK companies in optimising their export potential.”