The Return of the Sea Harrier, High Streets and Mental Health Boost 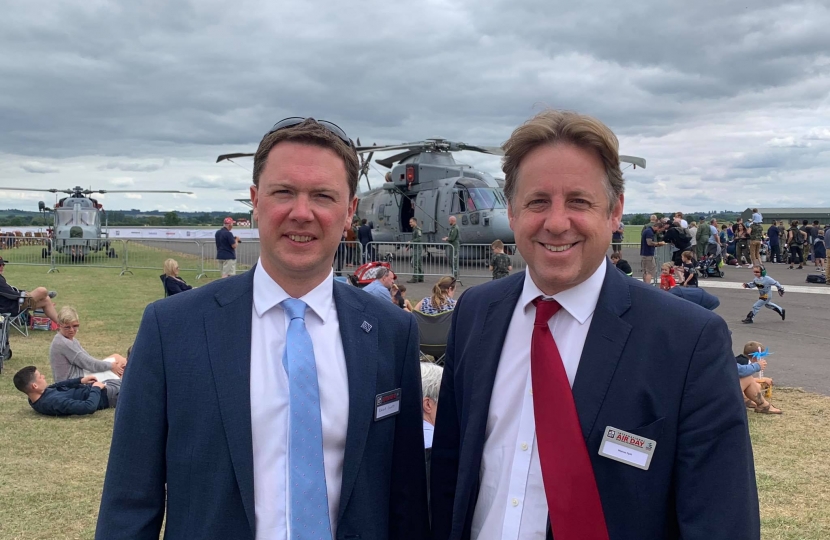 On Saturday I was lucky enough to be at the brilliant Yeovilton Air Day which showcases our aerospace industry and Armed Forces each year. As usual the helicopter displays of Wildcats and Merlins were proud moments for Leonardo and Yeovil and there was an amazing demonstration of vertical fixed wing capability through the years with the brand new Navy F35B alongside a Sea Harrier from Spain which many found an emotional return, alongside other more historic but amazing aircraft like the Westland Wessex, Wasp and Sea Fury.

In addition to the breath-taking aircraft, it is striking each year how many great characters are involved in the industry. This year I welcomed fellow MP Robert Courts whose constituency of Witney is home of the Red Arrows. Like me, Robert has been campaigning for increased budget and certainty of funding for the Armed Forces to maintain and develop our capability around the world and we will continue to make the case for this robustly in Westminster.

Following the news that South Somerset is through to the next round of the bid for the Government’s Future High Street Fund, I took the opportunity on Friday to have a walkabout with representatives from Benson Elliott, the investment company that owns the Quedam Centre and holds options on the Cattle Market site. They are proactive and passionate about the future of the area and are making good progress attracting tenants and investment including in an attractive mixed-use future for the Cattle Market. I stressed the importance of quality design to revitalising an area and the need to work sympathetically with our existing heritage whilst welcoming modern innovation as part of a really encouraging discussion.

It was announced last week that Somerset is to benefit from £400,000 of Trailblazer funding from the Government to set up pilots to help schools support children’s mental health and wellbeing. This is great news but it needs to be just the start. Nationally we know the 50% of mental health problems are established by the age of 14 so early and skilled intervention is crucially important. Teachers need to be properly supported too and given the up-to-date training to play their part in identifying which children may be at risk. I deal with too many cases where the system is too confusing or for some other reason young people are not getting the help they need and where teachers are under pressure to help.

Finally it would be wrong not to mention the amazing day of sport we enjoyed on Sunday. The men’s singles final at Wimbledon was one of the all-time classics but for me winning the Cricket World Cup was one of the finest moments in English sport. Of course the final act of the greatest finish of all time was the smashing of the stumps by Somerset raised Jos Buttler. He is welcome back to Somerset Cricket Club any time.

Good news for Chard today as the Department of Health & Social Care have announced the opening of a new Local Test Site at the Chard Guildhall.