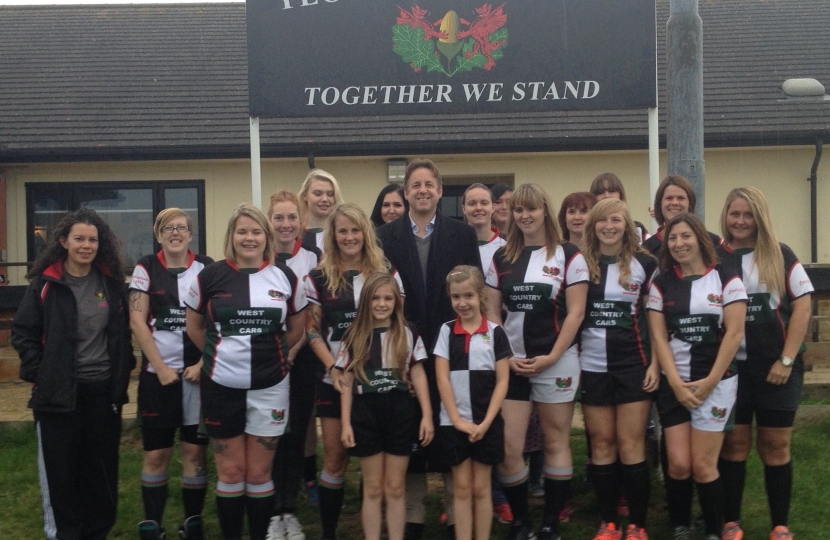 Yeovil Ladies Rugby Club continue to dominate in local women’s rugby. After the success of the England’s Women Rugby squad 2 years ago when they were crowned champions of the world and Team GB reaching the Rugby Sevens semi-finals in Rio at the Olympics, the sport should be thriving and should have inspired many. However, in the South West of England, it has not proved as popular as it should have. As part of Women’s Sport Week, Yeovil MP Marcus Fysh, a rugby enthusiast himself, was invited to visit the club to find out more on how they hope to inspire others and their future plans.

“Coming to the Ladies Rugby Club here in Yeovil was fantastic, as I spoke with the players about their recent successes. I, of course, have been keeping track on how they have been doing this season, and I hope to catch a game with my family very soon to cheer them on! They welcome people with all levels of fitness and abilities, although I myself had to decline joining for obvious reasons. But if not this club, I want to encourage more throughout Yeovil to join their local sports clubs, as it is not only a fantastic way to get exercise and allow you to get healthier, but it is an ideal way to socialise.

“There have been many women in sport that have become heroes to many, including the recent retiree Jessica Ennis-Hill, who was of course part of that Super Saturday 4 years ago in London. Women’s Sport Week helps raise awareness of gender equality within sport. Whether it’s the number of participants of a local club like in this case, or making sure women’s sports gets the same level of exposure to the men’s equivalent, gender inequality has been decreasing in sport. But more can be done, and it is being done, and it all starts at our local sports clubs such as Yeovil Ladies Rugby Club.”