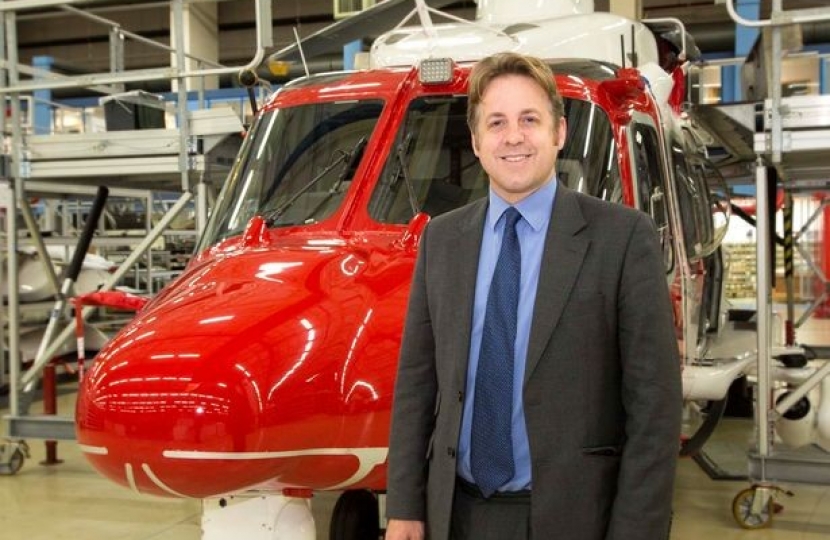 Marcus made the following speech in Parliament today - you can read the full debate here.

It is a great pleasure to serve under your chairmanship, Ms McDonagh. I thank my hon. Friend the Member for Witney (Robert ​Courts) for securing the debate. He gave a thoughtful outline of some of the high-level strategic issues we need to consider. I welcome the Minister to his place. It is a great honour to have a Somerset colleague performing such an important role for the country at this time.

I absolutely agree that we need a helicopter strategy, or a rotary-wing strategy. I have been championing the issue with the Department for some time. My hon. Friend the Member for Witney made some of the arguments for that very eloquently. In my constituency, we have probably the biggest centre of helicopter manufacturing operations in the UK. It is the only end-to-end design and manufacturing aerospace capability left in the UK. It is really important for the community and, I think, the country that we preserve those design skills, for some of the reasons that my hon. Friend mentioned.

It is massively important that we have the capability to make the most of the advances that are coming with autonomous vehicles in the aerial space. Unless we preserve some of those skills and invest in them for the future, it is difficult to see how we will play a full part in the development of new technologies. As my hon. Friend also said, if we want to be global Britain, have more of an industrial footprint in the world and have more influence with our NATO allies and others, it is massively important that we have a contribution to make in the technology sphere. I welcome the Government’s focus on more spending on R&D, skills and infrastructure, and their focus on investing in regional areas such as Somerset in order to level up and take advantage of some of the installed base we have.

I thank the Ministry of Defence for its support for the helicopter industry in the UK. It does a lot of work on export promotion and on helping to demonstrate the current capabilities that we build in Yeovil. My hon. Friend mentioned some of the platforms produced there, including the Merlin, which is a heavy-lift helicopter, and the Wildcat, which is a much smaller helicopter but is very well regarded around the world. I know how much the company appreciates the MOD’s help in demonstrating what a great aircraft that is to some of its export opportunities around the world. The company currently estimates that there is potential for £11 billion of export sales. This is a real opportunity to utilise what we do well in Yeovil to advance the nation’s export interests.

It is fair to say that the Wildcat is integrated in the Navy’s defence systems. The Navy has been more inventive and creative in thinking about how that platform can be integrated in its systems, and there are opportunities for the Army to use the Wildcat creatively. If it can get a missile, it would be brilliant to have it working in tandem with the Apaches to increase frontline capability. It is worth looking at that properly.

My hon. Friend also mentioned the potential for thinking about what replaces the Puma. Leonardo has a civil helicopter platform in Italy, the AW189, which it would like to militarise, and it has suggested that it might use Yeovil for its global centre for military excellence should sufficient orders come through for the AW149—the AW189’s militarised variant. It would be worth the MOD conducting a capability review to see whether that helicopter might form part of the solution.

I completely agree with my hon. Friend that we need to look at all these things in the round, and a formal helicopter strategy would be an ideal way of conducting that. The defence industrial policy was welcome, but we ​must focus on rotary wing. We have heard about some of the possibilities with using autonomous vehicles on our aircraft carriers. We welcome the MOD’s collaboration with Leonardo on unmanned aerial vehicles to investigate capabilities and potential solutions to needs in that area. That, however, is a long-term programme, and unless we invest now, we cannot expect the UK’s industries to be leaders. I therefore welcome that collaboration.

We should look more at how we procure, because, as my hon. Friend said, when procurement is done reactively, there is a need to look only at headline price, which does not necessarily take into account the gross value added to an economy by long-term programme development. Leonardo, for example, has nearly 3,000 employees at its Yeovil site, but there are about 10,000 people in the supply chain, and for every £1 of headline direct value added, 2.4 times that is added through consequential impacts on the rest of the economy.

This is a really important industry. The capability it provides for our forces is important, and we really need that sovereign capability. We also need to get better at innovation. It is therefore worth looking at how we certify, because some of the certification processes take so long. In other industries in the modern world we see shortening product development cycles, so we need to ensure that certification burdens and bureaucracy do not interfere with the swift development of our military capabilities. The ability to commercialise products depends on that. Often, a defence industry skunkworks—that is the technical term for a little company trying to do something unusual—will not know whether a product may be regarded as a dual-use product until five or six years into the development cycle, by which time it may have had to spend up to £10 million getting a working prototype up and running. That is a huge risk to take before knowing what its marketability will be. There are ways in which we could change the procurement process to make the system more innovative and easy to commercialise.

On foreign military sales, we should think about whether the UK should have its own sales programme. We hear a lot about what the US does in that regard, and it is quite attractive, but the US should not be the only country able to deal Government to Government. It might be worth thinking about whether the UK should offer similar deals to friendly allies, whether France or others, and how such a scheme could work.

I absolutely agree that we must make the most of our opportunities. I support the call for a formal helicopter strategy to complement the combat air strategy, as it would help enormously our long-term decision-making processes and justifications. On that basis, I absolutely welcome the debate and thank my hon. Friend for bringing it about.